When Kiro’o Games first set out to raise money for its debut video game, the Cameroon-based company ran into an unusual problem: investors thought was a scam. “It was really hard to get funding,” explains founder Olivier Madiba, partly because of negative stereotypes about African scammers. But if the idea of a Central African game studio seemed implausible, it’s also because Kiro’o Games is doing something that simply hasn’t been done before. They’re the first game developer in the entire country, according to Madiba, and while they might be breaking ground, he says it’s still “weird for Cameroonians to make video games.”

Maybe not for much longer. While some investors may have balked, the internet at large has proved more open-minded about opening their wallets; Kiro’o Games just successfully funded a $45,000 Kickstarter for Aurion: Legacy of the Kori-Odan, a fantasy-themed action roleplaying game. Unlike most fantasy titles, where European lore and history serves as the backdrop, Madiba’s game looks much closer to home for inspiration, drawing on African mythology and culture instead.

The hero of Aurion is Enzo Kori-Odan, the prince of a fictional country called Zama. After his wedding day and coronation is interrupted by a coup, he must fight with his bride Erine to save their country and regain their throne. There are no dragons or elves here, and the hero’s power originates not inside himself or a magical object, but rather in the collective energy of his ancestors, a force known as the Aurion.

Like Africa itself, the world of Aurion is diverse and populated by numerous distinct cultures and ethnic groups. But the game isn’t just inspired by African history—it actually imagines an entirely new history for the continent, one free of the imperialist aggressions that affected so many of its countries.Aurion‘s story takes place in a universe where Africa has “had 2,000 to 10,000 years to evolve without colonization,” said Madiba. “We don’t just put African clothes on old and classic games. We really tried to put our own signature on it.

Madiba grew up playing video games, and like a lot of kids in the late 1990s, he fell in love with the Japanese roleplaying game Final Fantasy VII. “I finished it six times,” he tells me via email. After high school, he decided to study computer science at the University of Yaounde and soon, he wanted to make games of his own. Unfortunately, his classes didn’t have much to offer about game development specifically and he didn’t know anyone who could help him.

So in 2003, he decided to declare his intentions to the world, and see what the world said back. He wrote an announcement that read, “I am searching for guys who want to make games,” and plastered it throughout the streets of Yaounde. Like the skeptical investors he would encounter later, many people found it hard to believe. “Everyone thought it was a joke,” says Madiba. The one exception was a young man named Wouafo Hughes, who saw the announcement and called him on the phone; an instant friendship was born. A year later Madiba met another aspiring game creator named Dominique Yakan, and the trio have now been working on Aurion—first as an amateur project and now as a professional one—for over a decade.

It hasn’t always been easy. Since Madiba founded Kiro’o Games in 2013 and assembled a team to develop the current version of Aurion, the company has had to deal with persistent power outages, which cut the electricity numerous times during their successful Kickstarter and Steam Greenlight campaigns. (“We lost almost two months of work, maybe more,” says Madiba.) But one of the biggest challenges facing the company is that there is simply no history or community of game development in Cameroon, and so they have to build one—socially and technologically—as they go.

“Making video games in Cameroon at this level is still completely new,” says Madiba. “Here, there is no school to learn how to make them. You can learn designing or coding, but not oriented towards video games. So our team is completely made up of self-educated designers and coders, guided by their passion for video games. They were hard to find, but they all came because of interest of the project and the challenge it represents.” 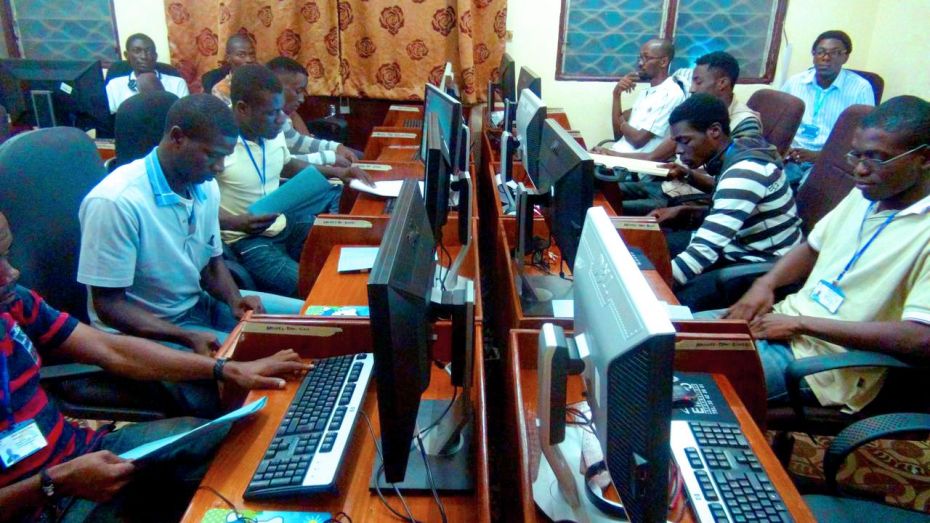 Despite the lack of formal training available for making video games, Madiba says most young people in Cameroon are very interested in playing them. “For those who don’t have consoles, they play at arcades, or in public game rooms with consoles,” says Olivier. He also notes that they’re starting to see more and more casual gamers, including people who transcend the stereotype of the young male gamer. “It is really weird to have your mother ask you to put [The Treasures of] Montezuma on her phone,” he says.

Madiba hopes that Kiro’o Games will help pave the way for a broader community of video game developers both in Cameroon and throughout the continent. “Many studios have been emerging these last few years,” said Madiba. “We hope that this community grows and evolves together… That’s one of our greater and [more] exciting challenges: building a real entertainment empire [for] videogames and more in Africa.”

The Kickstarter campaign for Aurion ends on October 20, and the game is slated for release in April 2016.