According to several specialized firms, the continent is the next major ICT market. The largest manufacturers of mobile and technological devices are investing more and more. Smartphones, tablets, laptops are democratizing. Connected objects should soon multiply. However, this transformative 2.0., A carrier of economic growth also carries a significant environmental risk to which Africa remains poorly prepared.

In ten years, the volume of mobile phones has greatly increased. In its 2018 report on the mobile economy in sub-Saharan Africa, the World Association of Telephone Operators (GSMA) estimates that 444 million mobile devices are in use in this part of the continent. This figure stems from a parallel with the single mobile subscriber volume in Africa. Across the continent, the figure exceeds 450 million mobile phones in operation. By 2025, the GSMA estimates that the number is expected to reach more than 650 million across the continent. By adding to the mobile phones the many other technological devices (tablet, laptops, PCs, etc.), it is in all more than 500 million different technological devices that have already been consumed in Africa, nearly 700 million who are in usage courses and more that will be used within eight years.

In all, more than 500 million different technological devices have already been consumed in Africa, nearly 700 million are in use and more will be used in eight years.

These figures, which reflect the dynamism of the ICT and telecoms segment and its contribution to economic growth, also reflect a significant environmental risk, to which the continent is still poorly prepared.

Although many African countries such as Kenya, Uganda, Tanzania, Rwanda, Burundi and South Sudan are already preparing environmental legislation for better management of electronic waste, it is mainly the technical infrastructure that is lacking. in Africa. As a result, millions of lives are threatened.

ICT product recycling plants, there are currently not many on the continent. The waste of mobile phones, computers, modems, tablets, etc., still land in landfills, public or improvised in neighborhoods, near homes. One of the most striking cases is the landfill of Agbogbloshie, a district of Accra, Ghana. The problem of IT and technological waste generated locally is reinforced by waste coming from abroad. 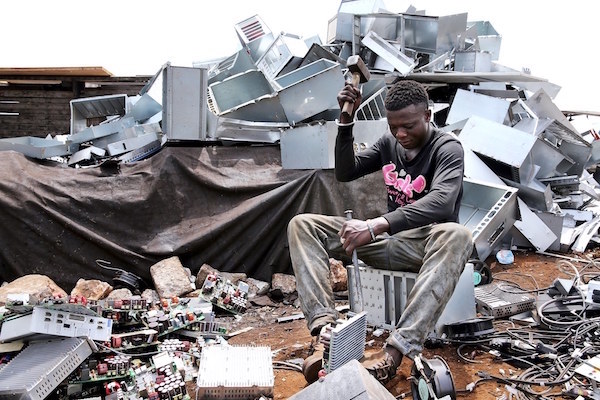 In inclement weather, devices release lead from printed circuit boards or cathode ray tubes, and mercury from backlighting. There is also cadmium, chromium and even reagents such as cyanide.

All these devices, cell phones and other accumulated in the nature, the UNEP indicates that they are the cause of an important health risk for the populations because they pollute the soil, the water and the air.

In inclement weather, devices release lead from printed circuit boards or cathode ray tubes, and mercury from backlighting. There is also cadmium, chromium and even reagents such as cyanide. Aware of these dangers for people and for the economy, some countries have already embarked on recycling.

According to an inventory on electrical and electronic waste, conducted by the Ministry of the Environment, Rwanda alone showed in 2017 a production potential of 10,000 to 15,000 tons of waste per year. To prevent the debt that results from the growth of the ICT sector is ultimately harmful to the economy of the country, the government decided to take the problem by launching on December 4, 2017, the first national recycling facility. electronic waste from Rwanda. Located in the Bugesera District, Rwandan Franc infrastructure, financed by the Rwanda Green Fund, has been designed to dismantle and recycle more than 15 types of electronic and electrical equipment (EEE ) including PCs and mobile phones. Six months later, it is 120 tons of electronic waste; 400 recycled computers, 279 tons of carbon dioxide that were dismantled.

In Nigeria, where more than 15,000 tonnes of ICT and telecom waste are produced each year, Hinckley Recycling decided in February 2018 to cope with this by installing a recycling plant in Ojota, Nigeria. State of Lagos. Since last May, she is officially in activity. Hinckley’s Business Development Manager, Belinda Osayamwen, indicated that the company was committed through this recycling plant to “creating a standard of excellence by providing quality service for the disposal of electronic waste and ensuring what the service is always respectful of the environment “. It stressed that “the processes involved in scrapping would at all times comply with all relevant legislation applied by recognized authorities – local and international”.

In Kenya, the country has been home to three electronic waste recycling centers since 2008, including mobile phones, PCs and tablets. They allow it to process nearly 20,000 tonnes of annual waste generated locally and imported. 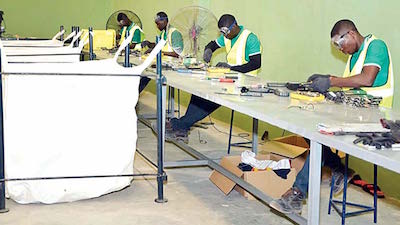 In Ghana, the integrated e-waste recycling plant takes shape in October 2018. The President of the Republic of Ghana, Nana Akufo-Addo, announced it on August 29, 2018, at the launch of the integrated national program. electronic waste management. The infrastructure, which will be based in Agbogbloshie, a suburb of the capital Accra, is a fallout from the passage in 2016 of the declaration on the control and management of electronic and hazardous waste, in law whose operational phase begins in October 2018 This law, which entrusts SGS with the construction of the recycling plant, also gives it the task of verifying, evaluating and collecting the anticipated eco-tax on all electrical and electronic equipment of all types. exporting countries.

This law, which entrusts SGS with the construction of the recycling plant, also gives it the task of verifying, evaluating and collecting the anticipated eco-tax on all electrical and electronic equipment in all countries. exporters.

President Akufo-Addo said that through this plant, Ghana is “on the verge of putting an end to this global environmental challenge [growing electronic pollution with the development of the digital world], which is rapidly becoming a threat to the world. national security for most of the continent’s governments “.

According to the Global Partnership on Waste Management, the informal management of electronic waste, still widespread in Africa, remains inappropriate because techniques, such as open burning generally used to recover valuable materials, are very dangerous to human health and the environment.

The informal management of e-waste, still widespread in Africa, remains inappropriate as techniques, such as open burning generally used to recover valuable materials, are very dangerous for human health and the environment.

Keith Alverson, the director of the International Environmental Technology Center, hosted by UNEP, explains that “the number, variety and complexity of electronic products are increasing exponentially, and all include valuable and dangerous materials.” He believes that “the challenge of reuse, recycling and proper disposal of e-waste is already huge, and will increase – whether in individual households, in the private sector or in countries around the world as we continue to benefit more and more from electronic goods and services “. 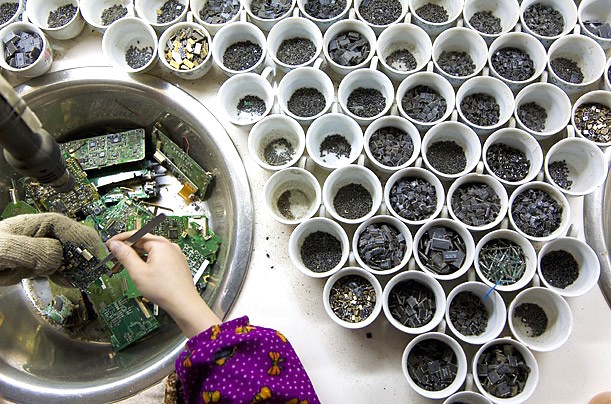 Clearly, recycling can be financially attractive for African states. By recycling computer components and selling them to manufacturers of mobile, computer and electronic devices, African countries will reduce the pressure on their mineral resources.

By recycling computer components and selling them to manufacturers of mobile, computer and electronic devices, African countries will reduce the pressure on their mineral resources.

Gold, palladium, cadmium, tungsten, chromium, silver, etc., used in the manufacture of various components of electronic devices can be recovered and reused. Beyond the revenues generated by the resale of precious metals, there is also the recycling ecotax collected from all the countries exporting electronic equipment. In Ghana, for example, the government hopes to raise nearly US $ 100 million a year from its recycling plant.